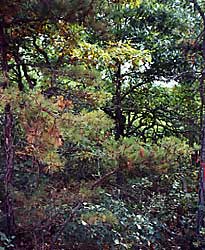 Once used as a woodlot to fuel the furnaces at the West Barnstable Brick Company, the 86 acre Makepeace sanctuary located in Mashpee is primarily a continuous pitch pine and oak species forest. The land was donated to Orenda by the heirs of Mr. Makepeace, known as “The Cranberry King” for his thriving cranberry growing business.

The 50 acre adjacent Mercy Lowe land was purchased in 2001 at auction. Many generous donors and funders made this acquisition possible.

How Acquired
Makepeace Sanctuary donated by heirs of William Makepeace.

Directions: Access by foot only—from the northeast gate of the Carl Monge Sanctuary (opposite Hane Road on Lovells Lane) proceed southwest down Simon Lowe Road (also called Bookers Road) to Grafton Pocknet Road. Then walk north along the dirt road which becomes Bearses Road. Follow road north to Great Hay Road which is gated and comes in from the right. This junction is the northern end of the Makepeace property along Bearses Road. Time? About 45 minutes and yes, it’s a hike!